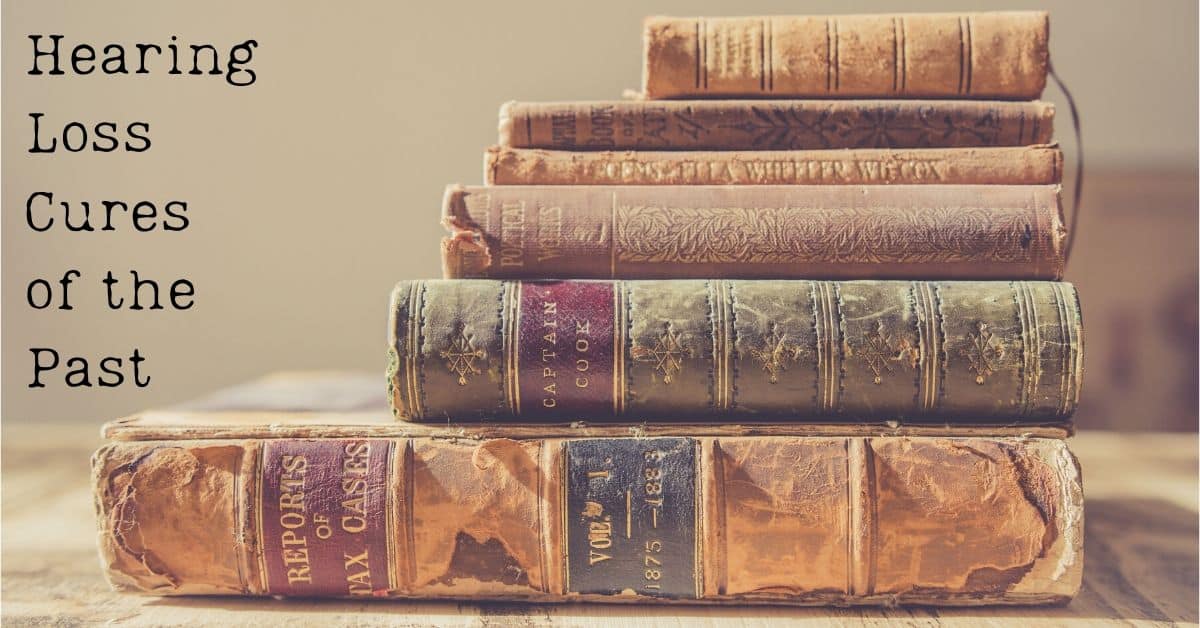 Hearing loss has been a part of human existence from the start. The delicate cells in the inner ear are susceptible to damage, either from a head injury, an illness or infection, or even from exposure to loud noise. Doctors and scientists throughout the ages have had some wacky solutions to hearing loss, and people were willing to try anything to get their hearing back.

In ancient Egypt, doctors had a number of cures for hearing loss, and the Ebers Papyrus, an ancient medical text dating from around 1550 B.C.E, mentions several remedies for poor hearing. These cures included putting all manner of things into the ear canal, including olive oil, bat wings, ant eggs, and even goat urine, all in an attempt to restore hearing.

It’s possible that these cures might have had some success. For example, a hearing loss caused by impacted earwax, or a build up of earwax in the ear canal, could potentially be treated with olive oil. However, any hearing loss caused by damage to the cells in the inner ear can’t be cured with oil, and certainly not with bat wings.

Throughout history, herbalists have concocted treatments for hearing loss. Apothecaries would prescribe remedies including ginkgo biloba, ginger, or spearmint. Other popular herbal remedies included panax ginseng, rehmannia, and magnetite. Even opium and snuff tobacco have been used to treat hearing loss.

Throughout the middle ages, bloodletting was a common cure for many ailments. Doctors believed that illnesses were caused by toxins in the blood, and that by draining some of the patient’s blood, the illness would be cured. Leeches were often employed in this task, and the patient would have several leeches placed on their body. Bloodletting was also used as a treatment for hearing loss, but didn’t show any signs of restoring hearing.

The first known amplifiers used to facilitate hearing were created in the 1600s by Paolo Aproino. These ear trumpets couldn’t cure hearing loss, but when held up to the ear, they amplified sounds in the environment, and make it easier for those with hearing loss to make out sounds.

When the famous composer started to lose his hearing in his 20s, Beethoven consulted with doctors to find a cure. He tried every treatment, but within a few years the musical genius was completely deaf. One of the first cures Beethoven tried was almond oil earplugs. Along with herbal remedies, he would soak cotton balls in almond oil, and place these in his ears.

Next, Beethoven tried a daily regimen of Danube baths, or daily soaks in lukewarm river water. He then tried applying the bark of a toxic plant directly onto his arms. His skin blistered and itched, and the composer would be unable to work for days at a time. Needless to say, this treatment had no effect on his ears, and his hearing continued to worsen.

Finally, a doctor ordered isolation and rest as the best treatment for Beethoven’s failing hearing. He moved out of the city, and spent time in the countryside where life moved at a much slower pace. This new stillness did nothing for his hearing, and the isolation sent Beethoven into a depression.

In the 18th century, an Italian scientist named Luigi Galvani found a way to send an electrical current through certain parts of the body. This would stimulate that area, and help the body heal. Galvanism was used as a cure for hearing loss, and even Beethoven tried this treatment, allowing a mild electrical shock to be delivered to his ears.

In the 1800s, scientists started looking towards technology to cure hearing loss. One of the popular treatments of the time was the use of an artificial eardrum. This small device would be placed into the ear canal, and was supposed to help sounds travel to the inner ear. Sadly, these devices were also ineffective in treating hearing loss, and they caused a lot of pain when placed into the ear.

Today we know that hearing loss can’t be cured. Rather than pouring liquids into the ear, or shocking the ear with electrical currents, modern technology focuses on treating hearing loss. Modern hearing aids amplify sounds, help you focus on what you want to hear, and allow you to enjoy life with clear hearing.