The Effects of Untreated Hearing Loss

One in three people over the age of 60 have hearing loss, making it one of the most common conditions affecting older adults.

Although most adults wait an average of 5-15 years before seeking help for their hearing loss, there are compelling reasons you shouldn’t. The sooner you get help for your hearing impairment, the easier it will be for your brain to use the auditory pathways it’s developed for processing sound. The same is true for children with untreated hearing loss. Research tell us that babies whose hearing impairment is detected and treated by the time they are six months old are more likely to learn essential speech and language skills than children whose hearing impairment goes undetected. Socially, children and adults with untreated hearing loss are at risk for developing challenges listed below.

The psychological effects of untreated hearing loss for both children and adults can include increased outbursts of anger, low self-confidence, frustration, embarrassment and depression. Adults may experience periods of sadness and grieving as their ability to hear diminishes. They also may feel more fatigued, as the struggle to hear and understand can be physically exhausting.

Fortunately, most of these issues are resolved once the hearing impairment is treated effectively. Hearing health professionals say that children whose hearing impairment is detected and treated early can develop speech and language skills at the same level as their normal hearing peers, which positively affects self-esteem, social interaction with peers and academic success.

Adults have similar success. A recent study found that 73 percent of individuals with hearing loss, and 41 percent of their relatives, believed their family relationships improved once they started wearing hearing aids.

Hover over to see the effect untreated hearing loss can have on communication.

Hover over to see the effect untreated hearing loss can have on family relationships.

Children with hearing loss often have trouble articulating their feelings, which makes communication frustrating for family members. Adults may feel they aren’t being heard and become isolated and depressed. Family members who have loved ones with untreated hearing loss say they sometimes experience feelings of frustration, annoyance and sadness.

Hover over to see the effect untreated hearing loss can have on income.

According to a study by the Better Hearing Institute, untreated hearing loss affects productivity, performance and career success, resulting in as much as a $30,000 loss in annual income.

Hover over to see the effect untreated hearing loss can have on isolation.

Adults typically distance themselves from family and friends because it’s too difficult to hear and participate in the conversation. Children are often isolated from their peers or become withdrawn because they have difficulty communicating or are embarrassed by their hearing handicap.

Brain Atrophy: Use It or Lose It

A brain atrophy, or cerebral atrophy, takes place when the connections between cells in the brain are damaged, or the cells in general are lost. This condition can be caused by a number of issues, including:
• Alzheimer’s disease
• Multiple sclerosis
• Cerebral palsy
• Huntington’s disease
• Epilepsy. 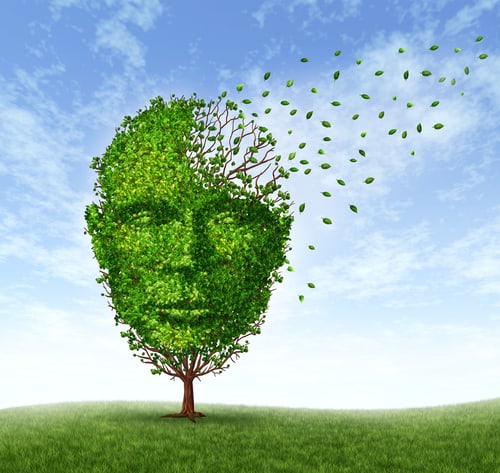 However, an atrophy can also be attributed to aging. This type of brain damage typically gets worse over time, but the ailment varies between each person depending on the location, cause and type of atrophy. For people with hearing loss, a brain atrophy can get increasingly severe because individuals are required to use more effort in order to comprehend speech compared to a person with normal hearing.

According to a study released in The Journal of Neuroscience, people who had hearing loss obtained a lower density of gray matter in the auditory areas of the brain, giving evidence to the age-old saying “use it or lose it.” While many people are aware of the need for hearing aids to understand speech, these devices are also important for proper brain function. “As hearing ability declines with age, interventions such as hearing aids should be considered not only to improve hearing but to preserve the brain.” Jonathan Peelle, lead author of the study, told Newswise. “People hear differently, and those with even moderate hearing loss may have to work harder to understand complex sentences.”

In the study, researchers found that people with hearing loss had less brain activity when focusing on complex sentences compared to others. Similarly, the areas of the brain that are most responsible for auditory response had less gray matter, which proves that people with hearing loss may experience accelerated brain atrophy. Because the condition affects the speed at which the brain processes speech, these two issues could be linked.

There are many symptoms of brain atrophy to be aware of, as it can affect the entire brain or just one part of the organ. You may suffer from dementia or memory loss, lack of motor control, seizures, or difficulty with speech, comprehension or reading. However, you may also experience generalized signs of a cerebral atrophy as well, which could appear every once and a while or on a daily basis. These include changes in mood, personality or behavior, disorientation, learning impairments, memory loss, difficulty with judgment or abstract thinking and challenges with comprehension and thinking.

Since brain atrophy is the loss or damage of brain cells, there is no treatment available to cure this complication. This means that the illness must be prevented with use of hearing aids and an active, healthy lifestyle. However, there are options to slow the damage and improve physical ability that is hindered by brain atrophy.

This shows just more reason why treating hearing loss should not be overlooked. Hearing aid technology has improved drastically over the years, and individuals with hearing loss can find a device that best suits their daily activities easily. If you find yourself having difficulty understanding speech or comprehending conversations, a visit to the audiologist may be in order.